My third Harper Impulse novel, The Half Truth, is released today in digital format, with the paperback on 4 June.  It’s a mystery with romance and, like my previous two novels, is set mainly on the south coast of the UK, although the story does venture to London a few times.

I hope you enjoy reading it as much as I enjoyed writing it. 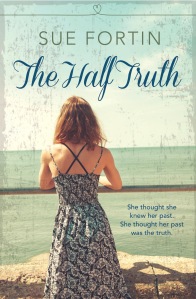 Every marriage has its secrets…

Tina Bolotnikov, widowed after her husband, Sasha, is killed in a car accident, relocates back to her hometown on the south coast of the UK, to bring up her young son. Her life back in London with her adored husband is now nothing but a memory; a history to pass onto her son.

DS John Nightingale saw his partner killed in the line of duty and has made it his personal and professional quest to bring to justice the Russian gang responsible. Five years on and the killer is still free but as reports come in of Sasha Bolotnikov’s brother returning to the UK, John is tasked with tracking him down and following him to the seaside town of Littlehampton.

Tina finds herself an unwitting connection to a world she knew nothing about. She thought she knew her husband. She thought their past was the truth. But now as the investigation draws her closer to DS Nightingale, professional lines are blurred and crossed, and only he holds the key to her future.